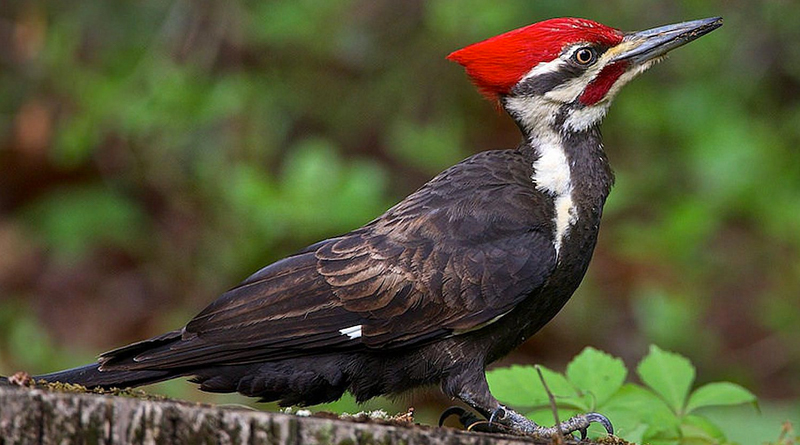 Everyone who feeds wild birds takes great pleasure in seeing new specie at their feeders. There is nothing more thrilling than attracting a rare or unusual bird. These are the moments where you don’t want to move to scare the bird away, yet you want to go get the camera to have proof of your sighting! My issue is that my dog has caught on to my gasps and reactions when I look out the window and this has not worked in my favor. She now jumps to the window and sometimes scares the desirable sighting away! It’s really hard not to react when you see something special, but I must practice! One local, year-round bird that brings about great excitement is the amazing pileated woodpecker.

Everyone knows of the cartoon bird Woody Woodpecker which is a characterization of a pileated woodpecker, a very loud and vocal bird that garners a lot of attention when appearances are made. These large birds are about 20″ to 24″ in height with a great wingspan of 26″ to 30″. The most notable trait other than their size is the crimson red crest on the top of their heads. Unlike other species of woodpeckers, both male and female pileated woodpeckers have the red crest with the male being identified by a red stripe across the cheek. They have a very strong bill, measuring about 2.5″ in length, which is used for the excavation of nesting cavities in dead trees and to aid in foraging for insects.

Pileated woodpeckers have a wide diet consisting of ants, wood-boring beetles and their larvae, along with fruit, nuts, and berries. One berry they really enjoy is that of the poison ivy plant. Pileateds can often be seen attacking dead trees to either dig for food, drum for territory or to excavate a cavity. Nesting begins in April when the male begins the task of creating a cavity in a tree to attract a female. Once a pair has bonded, they will mate for life. The female lays three to five eggs and both parents will incubate the eggs for 12 to 16 days. After 24 days, the young will fledge and the nest is abandoned. Pileateds do not return to the same nest each year but the cavities provide for many other species. Smaller songbirds will use the cavities as a roost in winter and other birds, like wood ducks and screech owls will, re-use the cavity for their own nesting.

Recordings of pileated woodpeckers drumming for territory counted 16 beats per second! They usually drum on dead hollow trees to maximize sound. Territory size can be as small as 1,000 acres in suburban areas to 4,000 acres in the deep forest. Pileated woodpeckers will tolerate other pileateds in their territory during winter, but in summer, many battles will be fought with dive-bombing, striking each other with their wings, and even jabbing with their powerful bills.

Pileated woodpeckers have been making an amazing number of appearances at birdfeeders throughout the city and rural areas. I am very pleased at the number of reports we have been getting over the past few years. My first sighting was unforgettable and every time I see a pileated woodpecker, I am just as impressed as the first time! They are truly spectacular to see in person.

A suet log feeder is the most successful feeder to attract pileated woodpeckers. These natural logs packed with suet are renowned for bringing these magnificent birds into backyards. We have even had reports of adults bringing their young to these feeders. There is a summer and winter version of the suet and it is filled with nuts, crickets, and mealworms and also caters to smaller woodpeckers, nuthatches, and chickadees with orioles and robins in the summer too! Try attracting this special bird to your yard, just don’t let your dog beat you to the window!

Sherrie Versluis is the owner of The Preferred Perch, 1604 St. Mary’s Road.