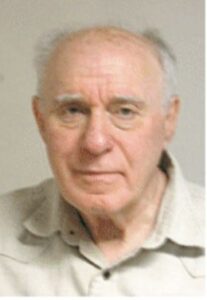 I have written about Julius Morry several times over the years including stories in the Jewish Post and news, the former Pacific Western’s inflight magazine, most likely the Free Press and other publications, and I am happy to be able to tell you that as he nears 90, he is still creating the magic that makes him unique.

Julius Morry is the ultimate artist.  But, unlike other artists whose works are meant to be seen, his work is meant to be invisible.  That’s because Julius’ skill is art restoration.  When he restores a piece of china, a sculpture, or a painting, you would never know that the piece had ever been damaged.

I can speak from personal experience having once brought him a piece of pottery with part of the lip broken off. After he worked on it, it was impossible to discern that the vase had ever been damaged.

After more than 50 years in the business, the longtime Garden City resident estimates that he has restored more than 40,000 different items encompassing ivory, Inuit carvings, copper, china, crystal, porcelain, glass, oil paintings, dolls, picture frames and lamps – everything except furniture.

It began for Julius in the mid-1960s when his brother, Bernard, who was in the art restoration business in L.A., invited Julius to join him in business in the States.  At the time, Julius was working in administration at the Victoria hospital and doing some restoration work as a hobby.  (He notes that his mother was a painter and sculptor.)

So, Julius quit his job with the intention to take up his brother’s offer.  The catch was that the visas were a long time in coming and he had to earn a living in the meantime to support his family.  He started visiting local antique stores and moving companies and was soon so busy that he decided to stay in Winnipeg.

Art restoration, he noted in one of our earlier interviews, is a craft for which there were no manuals.  “I had to create my own techniques, materials and tools from scratch,” he said.  “A lot of items I receive for repair are missing pieces that must be replaced so that you would never know the item had ever been damaged.  The new part I make must blend in. The colour must match. There are hundreds of shades of white alone.”

He noted that the only instances where he turns down an assignment is when the item is so badly damaged that it is not worth repairing.

Julius over the years has done work for jewelers, churches and museums as well as moving and insurance companies.  His largest assignment was the restoration of 92 fire-damaged items – covered by insurance -- for a private collector.  “The paintings had suffered smoke damage,” he recalls.  “I replaced the damaged parts and was able to match the colours with the surrounding areas.”

The single most expensive objet d’art that he worked on was a New York collector’s pre-Ming Dynasty porcelain vase which was valued at $40,000.

“A lot of people bring me objects that have sentimental value to them,” he notes.  “It is gratifying to see their joy when they come to pick up the items.  Some cry. Others hug me.”

He reports that he has worked for clients throughout North America and as far afield as France and Germany, Iceland and New Zealand.

Now he points out that business isn’t what it used to be.   “The market has changed considerably over the years,” he comments.  “Older people still value china and figurines, for example.   Most of the people who bring me pieces for repair are older.

“For younger people, though, if something is broken, they more often throw it out and buy a replacement. Younger people are not interested in spending money on antiques.”

These days, Julius still works part time. But, he says, he always has new items on his work bench downstairs at his home waiting to be worked on.

“The work keeps me young,” says the father of four (with his wife, Shirley) and grandfather of five.