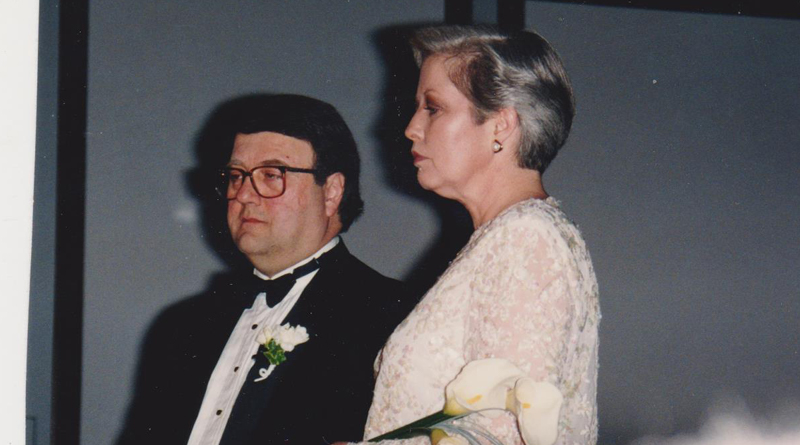 Over the holidays we were lucky enough to have both of our children in Winnipeg.

Our son and daughter-in-law live here with their two special little boys, but our daughter has relocated to British Columbia where she loves the weather. In fact she loves the place so much that she has found the person she wants to spend the rest of her life with. This is a wonderful thing for she has always wanted a partner and especially one that makes her so happy. When she told us over her visit that she was getting married, Barbra said, “When? How long have you known her?” To which our darling child replied, “You only knew Dad for two weeks when he proposed.”

And that is the truth. I have always been a very instinctive person and when Barbra and I connected, I felt sure that this was the one for me.

In fact, we were married only ninety days later in a whirlwind of activity and entertaining put on by family and friends. It was a tremendous leap of faith on both our parts. We did know a little about one another, but the learning curve was steep. People who knew one side of the equation but not the other were making bets that we would not last six weeks, six months, six years. We knew better and have proven them to be dead wrong.

My mother and father wanted to see me married and they embraced Barbra right from the beginning. Barbra’s mother was an amazing woman. She later confessed to me that she had always wanted someone to look after her daughter and was pleased that it was me. So there we were with both sides of the family on our side in every way.

Prior to our marriage, my Aunt Becky took me out for lunch and exhorted me to not usurp Barbra’s role as a wife. She knew that I had lived alone and kept my apartment spotless, that I could cook and entertain, that I knew how to buy gifts and remember important dates and that I was a very social person. This was, she felt, a “wife’s” role in marriage. She was a traditionalist in every way.

I saw things differently; marriage was a co-operative thing where both should do their part and not threaten the other one.

I loved to cook and entertain and still do but hate repairing or fix things around the house.

Barbra, on the other hand, has inherited that gene from her mother and loves her power tools and drills and various hammers and screwdrivers. I only use a hammer to hang pictures and I am forbidden to touch her work bench downstairs. Secretly, I am thrilled with that rule.

We have it all worked out. If there is painting to be done I am scarce on the scene. I have done it, but the bitching and moaning is too much for Barbra so she would rather do it alone. When we entertain, certain parts of the meal are my domain and certain parts are hers. We work very well together in a kitchen and can almost predict the other person’s thoughts. We both know our strengths and weaknesses and try to stay out of the other’s territory. We know all things can be accomplished with some negotiation.

At our twentieth wedding anniversary, although we both disliked the idea of the Hallmark “silver wedding”, we had a huge event where we renewed our vows in front of our family and friends with our children as witnesses. Now, we are coming to 47 years of marriage and are trying to escape the notion of a “golden” celebration.

So, what kind of advice do we have for our daughter in her upcoming marriage? Always keep the other person in mind when you make decisions and allow them space to alter your thinking. Keep communication open and when you are mad, say so. Don’t carry your anger around like armor. Learn to laugh at things that happen, especially your own mistakes. Be honest and forthright but never hurt or bruise the other person. Be thoughtful and do little things for one another on a regular basis. Respect one another’s space and allow the other person to grow. Support them when they try new things.